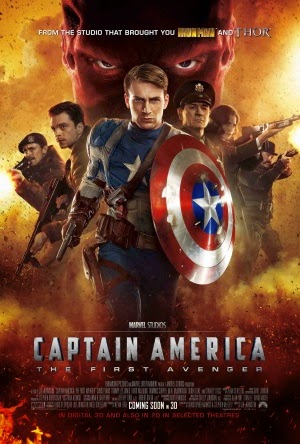 The final installment to the Marvel Cinematic Universe before 2012's The Avengers has finally hit cinemas in the form of Captain America: The First Avenger. We've seen the likes of Iron Man, Hulk and Thor on the big screen since it all started in 2008, but now it's time to take a trip to the past and see how the world's first Avenger came to be.

Set in 1942 during the Second World War, the film tells the story of Steve Rogers (Chris Evans), an aspiring soldier deemed physically unfit to enlist in the US Army. However, after being chosen as a participant for Project Rebirth, he is transformed into Captain America; an advanced super soldier who must guide the United States to victory. He eventually finds himself leading an army to take down the notorious Red Skull (Hugo Weaving), the leader of the HYDRA terrorist organization, who has unleashed a god-like threat in order to achieve world domination.

Visually, Captain America succeeds in capturing the essence of the 1940s through some excellently crafted sets, props, costumes and an ideal choice of shooting locations. This is what forms the World War II vibe one would expect; but then, in the spirit of a good ol' fashioned comic book film, we have the abundance of fictional, high tech weaponry and the dynamic CGI set pieces as well as some awesome fight scenes, which genuinely do look cool in 3D. Captain America's suit has also been given a solid revamp; a polished blend of the iconic colour scheme and a bulky army uniform, ensuring that we can still recognize the hero without bursting into hysterics at a ludicrously tight outfit.

Not only is our titular hero a real pleasure to watch when beating down mindless henchmen, but he's a solid character in terms of depth and emotion as well. He's always likeable; and never made out to be a brutal, cheesy superhero with no purpose but to save mankind. Underneath all his muscle is a heart, and it's really easy to relate to him during some of the hurdles he encounters throughout the film. Our villain, Red Skull, is a bit flat and generic, but remains a solid antagonist; his evil insanity clearly illustrated with every scene. There's a fair few characters you won't honestly care for, though; namely Peggy Carter (Hayley Atwell) who serves as the Captain's love interest. The romance is bland, forced and rather sappy, which in fairness is the case with a lot of comic book movies, but it doesn't stop the character being anymore wooden.

Chris Evans fits the role of the Captain exceedingly well, never showing him to be a brute or an arrogant patriot. We get the feeling that his superhuman strength is merely physical; he's still a human deep down, and can suffer just like one, which is all endorsed by Evans' great performance. Hugo Weaving is also a great choice for his character; the German accent he has going on is solid, and although the character is (as previously said) a bit generic, Weaving still manages to exemplify what makes an intimidating villain. Though the supporting characters aren't the most interesting, they're all performed nicely, even Hayley Atwell as Peggy Carter, and especially Tommy Lee Jones as Colonel Chester Phillips.

If you're a fan of superhero movies, or have enjoyed the previous films in the Marvel Cinematic Universe, then Captain America: The First Avenger is an essential watch. Pleasantly old school with an abundance of satisfying set pieces, fight scenes and a handful of great performances, it is sure to please all fans of the genre and will leave you with a ravenous appetite for The Avengers next year.

Oh, and stay behind for a bloody awesome post credits scene.

Written and posted by Anonymous at 6:18 pm