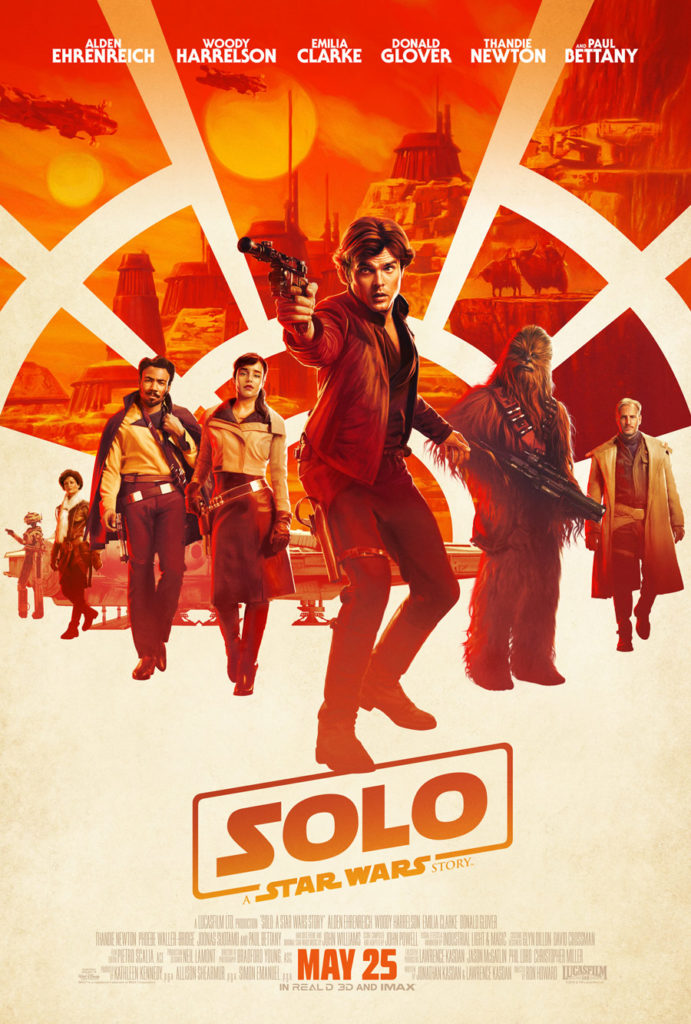 The Star Wars sequels have got off to a pleasant start in terms of box office receipts, though some of its narrative directions have been left with mixed responses from some of the most dedicated fans; said trend doesn't change much for this year's Solo, another spinoff from the main series that explores the backstory of one Han Solo. I won't claim to know the Star Wars series and all of its expanded universe stuff inside out, but upon watching its latest blockbuster, I only had one response: why all the negativity from some?

Solo once again is an exploration of the iconic Han Solo's development and how he came to be the rebellious hero we all know and love. His character now finds itself in the hands of one Alden Ehrenreich, developing into the eventual bounty hunter we've all come to know in a mission to reunite with his lover Qi'ra (Emilia Clarke) following a failed escape from the oppressive world of Corellia. His subsequent adventures bring him into partnership with the stern Tobias Beckett (Woody Harrelson) and of course the beloved yet short tempered Chewbacca, and soon enough on a mission against rising crime lord Dryden Vos (Paul Bettany).

Of course with a film like this, the initial factor of much controversy is always going to be the recasting, should the new talent brought in be an acclaimed, hugely award winning superstar or not. Many reviews have left questionable feedback of Ehrenreich's effort in the role of Solo, but it seems quite a lot of said reviews leave such mixed responses and only seem to justify it with how his efforts can't match that of the beloved Harrison Ford. Such a mindset isn't a healthy (or fair) one; we can't endlessly compare our young Solo to the original to outline his overall quality, but once again it seems such a trait is inevitable with any recasting. Ehrenreich, at least in my eyes, does a fab job with his portrayal - he is still the same sly, skilful, and witty hero, one who always has a plan and works hard to pursue it. It's still largely the same Solo that we know well from the originals, yet of course more vulnerable given his younger and less experienced nature. All in all, Ehrenreich finds himself worthy "predecessor" to Harrison Ford, so to speak.

But it's not just Ehrenreich who performs well - in fact his efforts lead a generally superb cast all over. Woody Harrelson as our secondary protagonist Tobias Beckett is on a similar level of quality, and shares a perfect chemistry with Ehrenreich, as does his long term lover Qi'ra, despite her confusing characterization in latter parts of the narrative; and once again (without becoming too obsessive), one Joonas Suotamo dons the costume perfectly in his efforts as Chewbacca. Our villain once again lies in the form of Dryden Vos and the talents of Paul Bettany, and while he may not be the most memorable or thoroughly developed foe in film history, or hell even the history of this franchise, Bettany's efforts make him a threatening one whenever he's on screen for sure. One can also appreciate Donald Glover in his relatively minor role as Lando Calrissian, though he may come and go at bit awkwardly at times.

In traditional Star Wars fashion, Solo adopts a fantastic visual style, for the most part deftly blending fine costume work, animatronics, and CGI effects. Perhaps some of the fully animated characters can stick out a bit awkwardly when blended into scenes with animatronics or costumes, but it's not hard to say that the gargantuan budget is put to great use when it comes to all these aesthetics. Solo isn't free of any flaws; some of its story elements can feel a tad rushed when important, particularly as we approach the end, and others slightly dragged out - perhaps its 135 run time wasn't quite needed for some of the material included. What's more is whilst we're treated to a handful of superb set pieces, beautiful to admire in IMAX, maybe they can occur too often in rapid succession and drag out a tad when it feels they should be coming to a conclusion. But negativity aside, Solo remains a fun time at the movies, just as the original series always was, and all those involved have made a great effort without a doubt.

Written and posted by Comptinator at 6:06 pm 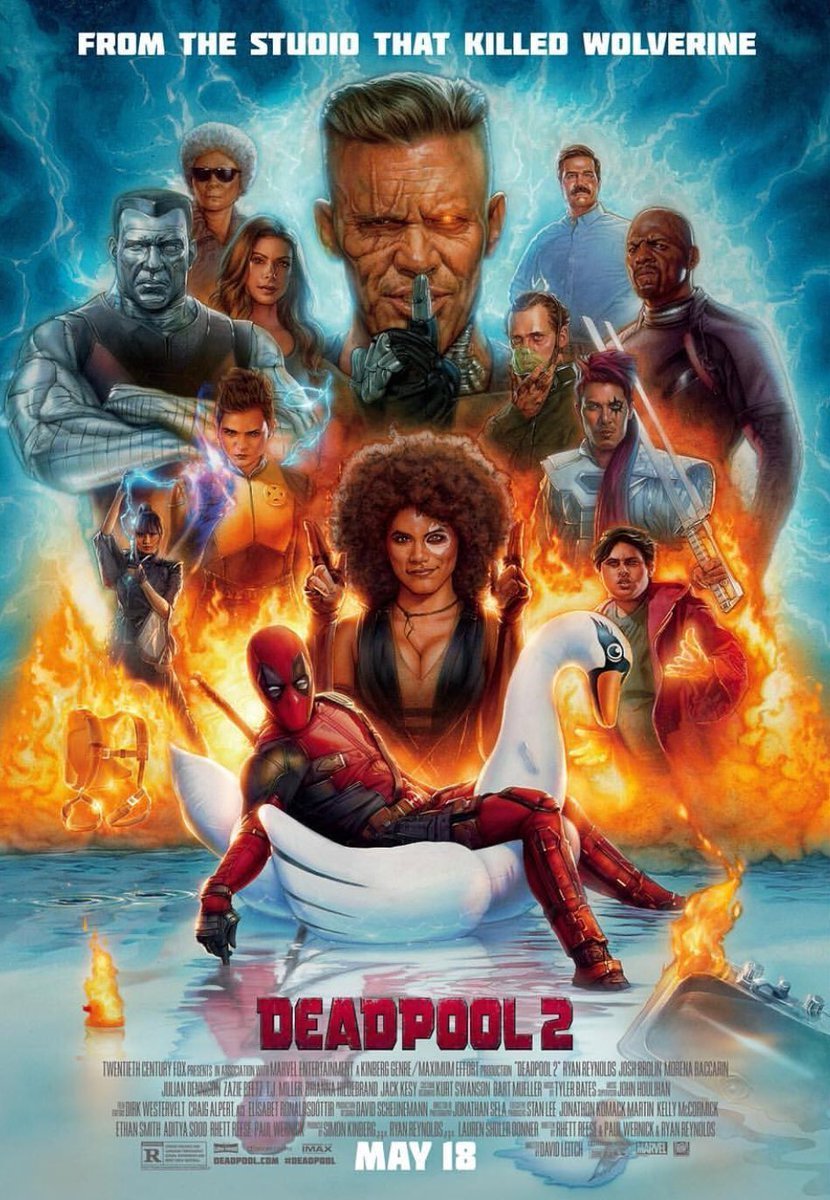 An R rated film starring a Marvel hero who perhaps isn't the most well known among the general public - and yet 2016's Deadpool found itself one of the year's most successful films, and most of us will say such an accolade doesn't go undeserved. Helmed by Ryan Reynolds' charmingly foul performance as the titular antihero, its balance of well structured humour and epic set pieces arguably makes it one of the most original superhero films in recent times. A sequel was always inevitable considering the profitable potential, but thankfully it's more than just a quick cash grab.

The story involves the audience quite literally in a sense - a plot burdened by lazy writing (as Deadpool himself enjoys claiming) begins with the tragic death of Wilson's true love Vanessa and his befriending of rebellious mutant kid Russell (Julian Dennison) when thrown in the "Icebox" detainment unit - all this coincides with the rise of a new villain known as Cable (Josh Brolin), who journeys from the future to seek vengeance on those responsible for destroying his own.

Deadpool 2 adopts the same charms as its predecessor and in many ways improves upon them with even wittier, perfectly timed gags, from violent slapstick to a number of hilarious one liners - much of it certainly not for the faint of heart. But while its narrative isn't without fault, mainly due to its final act dragging a tad at times, there's a surprising amount of thought put into it in a way that makes this once again more than a tonnage of random giggles; many things may feel cliché, but the film embraces this in a perfect way to benefit its sense of humour without it feeling like a forced attempt to justify, well, lazy writing.

This is all blended with the right amount of gripping action sequences which, humour aside, do offer their fair share of genuine thrills providing you're able to stomach some of the incredibly graphic violence. Perhaps the films' biggest perk is once again the central performance by Reynolds himself - the rebellious badass finds himself just as loveable as he was in the original, his bitter outlook on life and its consequential influence on his questionable acts of not quite heroism adding up to the majority of the film's biggest laughs. Perhaps the focus is largely pinned on him much more so than the many other supporting roles, but said supporting characters still mustn't go unnoticed - familiar faces like T.J. Miller and Leslie Uggams among many others support Reynolds in many of the funniest scenes, and Josh Brolin finds himself performing strongly (and hilariously) in another villainous Marvel role, despite his character feeling a little forgettable at times.

If my endless waffling hasn't made it apparent yet, Deadpool 2 is a hilarious and suitably action packed superhero flick, with a strong script brought to life through a superb cast and excellent visual effects. It's not for everyone, but after seeing the original's unexpected rise to immense fame, it seems to still click with many of us - and rightfully so.

Written and posted by Comptinator at 5:38 pm 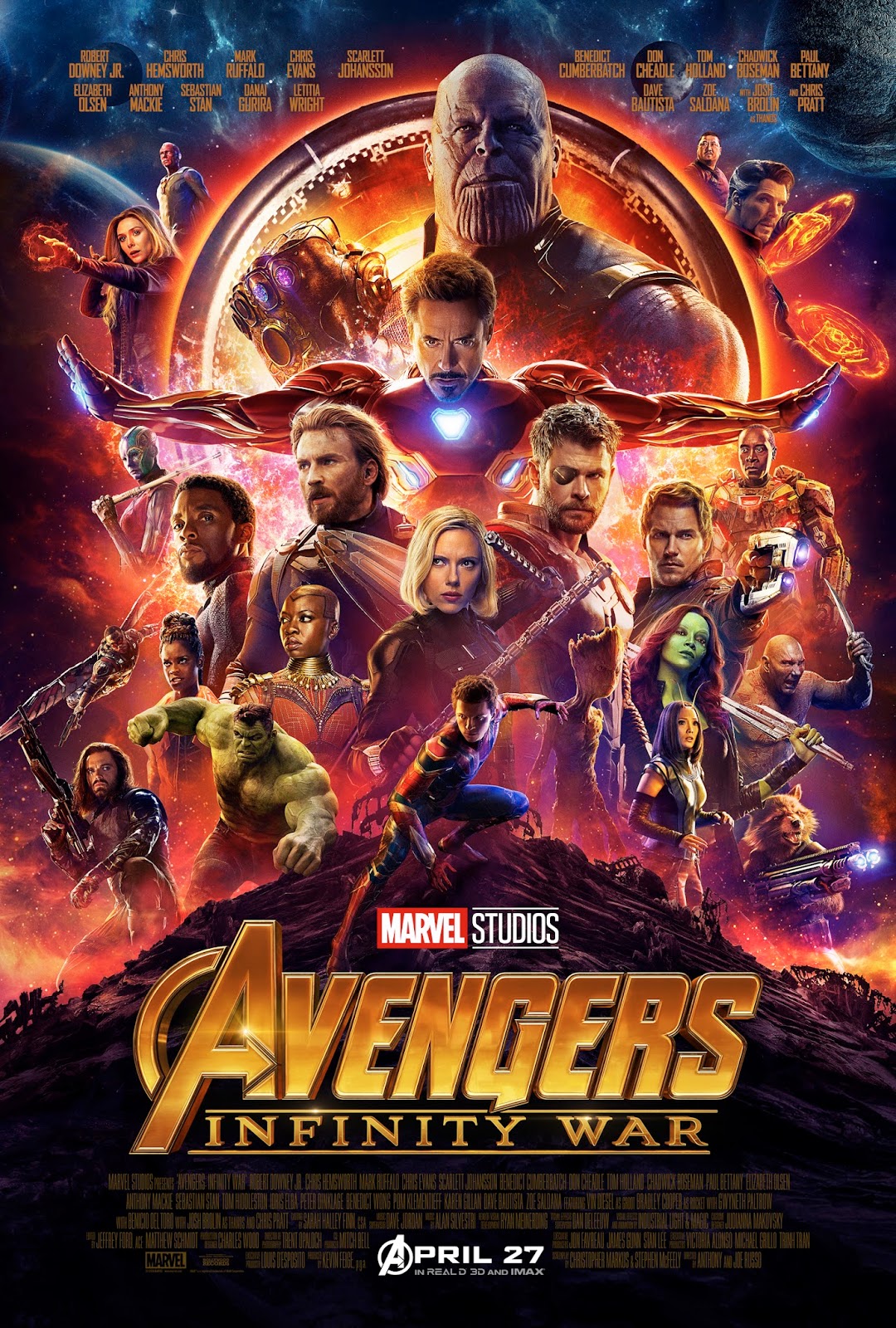 Another money making machine from Marvel arrives - Avengers: Infinity War has the iconic heroes face arguably their toughest foe yet, the power hungry Thanos (Josh Brolin), who seeks to acquire all the legendary Infinity Stones to gain control of reality itself. Dozens of previous MCU films have built up to this gargantuan story, evident when you see just how many heroes are blended together in comparison to the first film back in 2012. For those who may not even be the biggest fans of this ever expanding franchise, this certainly remains a superhero thrill ride worth checking out.

The MCU has been somewhat on and off for me in recent times - for every brilliant entry, there seems to be an equal amount of mediocre and sometimes downright awful ones. Sometimes I fear many more recent entries seek to do nothing other than to build up the story to these epic ensemble blockbusters. With this is mind, Infinity War thankfully doesn't feel like a forced blockbuster blending many iconic heroes together to simply turn a truck sized profit; while not without its faults, it's a largely well structured, thrilling adventure that, as has been said by many viewers and critics, never forgets the necessary depth and humanity required to make this more than a mishmash of chaotic battle scenes.

Infinity War is of course a film that prides itself on superb special effects, and said special effects are handled masterfully. Be it the incredible motion capture on the likes of Brolin as Thanos, or simply the lineup of stunning action sequences, it maintains the MCU's legacy of having some of the best visual thrills since Iron Man kicked things off over a decade ago now. Yes, some of its action scenes may drag at times, and perhaps become somewhat samey as we approach the conclusion, but it doesn't stop the from being enjoyable; and within them as we near the finale come a fair share of interesting twists and turns in the overall story, helping to keep us hooked even further.

The cast is also without a doubt one of the film's finest merits, many will agree. Our favourite MCU stars from previous hits are back, with a solid chemistry between one another that helps their interactions feel far less forced. It's Josh Brolin of course who stands out , at least in my eyes, not only due to the brilliant aforementioned motion capture effects but also his sinister yet emotionally stirring performance as one of the best villains in a superhero film to date. His talent thrives for sure, but such praise is also earned by the majority of the actors it can be said - ranging from beloved Downey, Jr. to more recent arrivals like Chadwick Boseman. I won't grossly defend every inevitable flaw - things do get a bit jumbled as we near the end, and there are flashes of excessive silliness at very awkward moments, but all in all Marvel brings us another exciting, largely well structured blockbuster. One can now only look forward to where the plot takes us next...

Written and posted by Comptinator at 4:12 pm