Having attended the cinema 25 times this year, and seen several new films outside of the big screen, there is a lot of content for me to formulate into the classic end of year best and worst lists. It was a bit more difficult to find ones for the worst this time around as I've seen sense since 2012 and not attended screenings for as many shitty films. But hey, there's still disappointments and stinkers, so let's check out the best of the worst right here, right now!

Though the premise seemed cool, Epic ended up being an animated film totally unworthy of its title. The animation is as gorgeous as it is in any Blue Sky production, but the storytelling leaves much to be desired with flat characters, a formulaic plot structure and a cliché climax. It isn't a bad film, per se, but just a very dull and uninteresting one that I'd never actively watch for a second time. 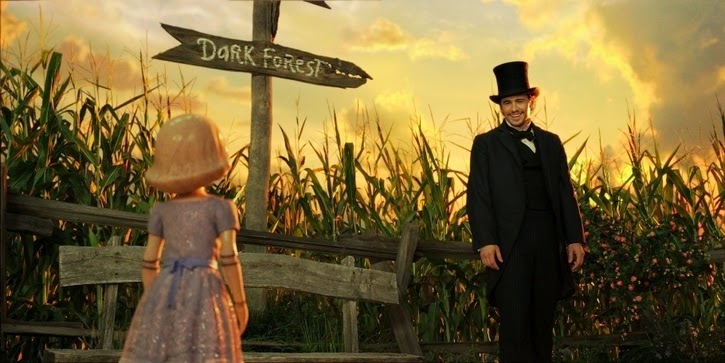 What makes my dislike for Oz so tragic is that I love the premise and thought the film had plenty of potential. But the execution is laziness at its best - everything is predictable, the origins of the Wicked Witch are ridiculous and the characters have little to no charm whatsoever. James Franco delivers a good performance as Oscar Diggs, who later becomes the classic renowned wizard, but even he struggles in such a mediocre script. A huge letdown that favours special effects over engaging storytelling.

#3 - Bronies: The Extremely Unexpected Fans Of My Little Pony

The Brony culture is one of the most annoying fandoms of all time; guys, is it really a new, edgy and hip thing to like a show aimed a completely different audience? I liked Powerpuff Girls back in the day and I still do. This fandom thought it was such a huge thing that an indie film was produced to document it - but the end result is a pretentious film that only sucks up to the fandom, shuns those who dislike it and uses editing to create very melodramatic scenarios. It doesn't explore the fandom honestly and renders Bronies to be victims of harsh bullying - something I think is offensive to many fans of the show who like it without judgement from others. Pompous nonsense.

Steven Moffat wrote some excellent stories for Doctor Who, such as The Empty Child and Blink. Him taking the helm as head writer in 2010 seemed like a promising idea, and I actually enjoyed the fifth series despite some stupid ideas. But my interest in the show dwindled soon after when Moffat adopted a love of deus ex machina, endless plot contrivances and an incomprehensible layer of plot threads intertwined throughout multiple seasons and episodes. The show has become much messier and strives to be far too complex - a negative consequence that this 50th anniversary film suffers from too. Moffat was written a story way too complex for its own good and lacking any of the emotion it requires to work out. As a result, the film is a boring and silly ordeal, even with an excellent performance from the legendary John Hurt.

The fact that Thor's obligatory sequel barely managed to cross $200 million domestically (compare that with Iron Man 3's $409 million haul) shows that the Marvel Cinematic Universe isn't always the money making powerhouse it's made out to be. The film has certainly been a success, but the lack of interest in the character has taken its toll on its box office performance; and hopefully those who bothered to see it felt the same as me. The film has one of the worst villains ever to grace a superhero film, who remains badass in appearance but boring as hell outside of this. That combined with poorly timed comedy, no emotional stakes whatsoever and some of the most boring, dragged out fight scenes in any Marvel film easily makes Thor 2 the biggest letdown of the year and has increased my worries for the future of this declining franchise.

I'd love to put Iron Man 3 on this list as disappointed me so much, but in hindsight it was an okay film - it's just that horrifying plot twist and messy pacing that made it a huge disappointment. Still, we've seen the stinkers, so check out the next list very soon for the much better films 2013 had to offer!

Thanks for reading!
Written and posted by Anonymous at 7:56 pm