Recently I was in an uncontrollable mood to play my Sega Mega Drive again. However, the poor little thing is dusty and weathered beyond belief, and the cables for it are long gone. After grabbing myself an emulator and revisiting some of my favourite titles back when I was a kid, I found myself interested at my opinions on them if nostalgia is removed from the equation. So, let's take a look at some of these classic Mega Drive/Genesis games and see which ones hold up, and which ones do not... 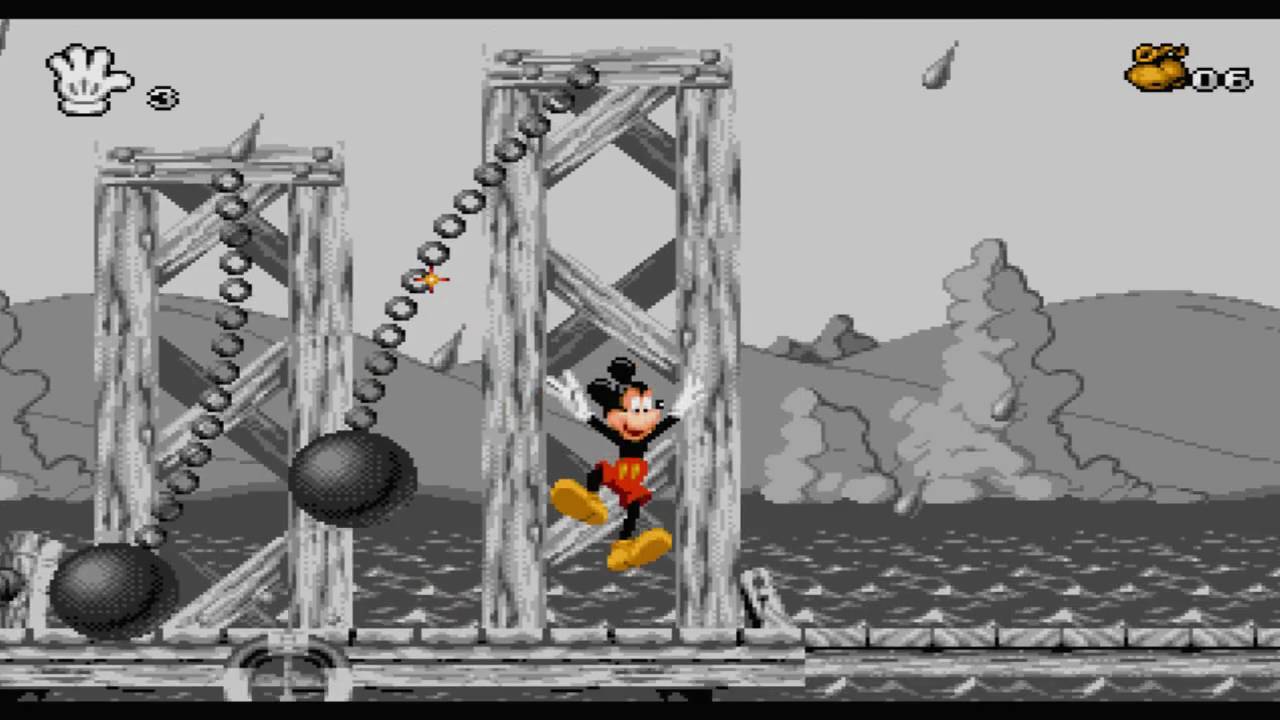 Based on Disney's iconic mascot, Mickey Mania by Traveler's Tales was well received when released in summer 1994. It has a lot going for it in terms of design; the visual style is gorgeous and deftly blends each of the unique worlds together seemlessly, paying tribute to the classic Disney cartoons that inspired it. It's also got a brilliant soundtrack and tons of joyous references to the Disney mythos.

What players mainly criticized was the game's insane difficulty, which made getting to the final stages beyond brutal. A particular trolley stage near the start of the game is so abrupt and poorly implemented that you'll likely die without completing it on your first try - the game allows you to continue despite failing this stage, but not without draining all your goddamn extra lives. Some parts of the game embrace the beginners traps which bring platforming to a halt and make trial and error an irritating necessity. For newcomers, the game can become virtually unplayable by the time you even reach the second level. Shame really, for the premise has a lot of potential and it simply isn't met.

This classic arcade beat-em up has you playing as the aptly named Alien Busters, who must fight off an invasion of absolutely terrifying looking aliens straight from Planet Nope in the fuckthatshit galaxy. The aliens have infested a number of towns and cities, so it's up to you to fight them off one by one by blasting them to oblivion. The game features some decent graphics and a catchy soundtrack, but can't help feeling outdated in today's world.

Now, that's not due to bad design, and I remember loving this game as a kid. But it certainly hasn't aged well and playing it today becomes a bore fairly quickly due to the repetitive nature of the enemies, who seldom do more than run at you and swipe their claws or tendrils. A lot of the enemies are lazily recoloured countless times in the later stages to serve as new opponents and thus killing them becomes a samey and somewhat dull experience. Great fun, but not for as long as it goes on for.

Spider-Man vs. The Kingpin

Not sure if I suck at this game, or if perhaps it genuinely is poorly designed. Who knows. But I could barely clear the first three levels without throwing in the towel. Controlling Spidey to web around the city, clinging to walls and scaling buildings becomes a clunky mess almost immediately and the beginner's traps that plagued most 2D sidescrollers at the time are present here. Enemies are ridiculously designed to a baffling degree; thugs with guns will stand on platforms above you shooting and shooting and shooting, never running out of ammo or pausing, just waiting for you to jump into their line of fire - and sometimes it seems you have no choice but to do just that. Bar its kickass soundtrack and great visuals, nothing about this time game really enticed me to keep going, even as a kid.

A lot of the Disney movie tie ins for the console were extremely enjoyable albeit bland experiences, and Pinnochio is no exception. Initially it's a little bit of a mess as to where you need to go and what you need to do, but once you bypass this it becomes a fun if short lived platformer that controls well and has some excellent music. But believe me, when I say short, I mean extremely short; you can literally complete it in around half an hour, and thus it seems a little uninspired and rushed. In spite of this, it remains an entertaining little package that will at least kill some time if you've got a boring day ahead.

Quackshot has one of the most loyal fanbases of any niché Sega Mega Drive game, and it comes as no surprise when you sit down and play it. One of my favourite Sega games as a kid, Quackshot remains a diverse and challenging experience even today. An experienced player can easily complete it within an hour, but newcomers are sure up for a challenge as they control Donald Duck on a quest across the globe. The game offers a steady challenge and is innocent enough for the younger crowd, but at times the unpolished jumping mechanics and beginners traps instigate many cheap deaths and make simple looking stages ungodly difficult. The vague necessity to backtrack can also bring the game to several annoying standstills, but still, the level design is generally brilliant, the atmosphere is superb and there is a surprising amount of depth to the gameplay, making it tons of fun even today.

Thanks for reading!
Written and posted by Anonymous at 8:36 pm