The Common Spams of Super Smash Bros. for Wii U

Super Smash Bros. for Wii U is damn good game, and online play has never been more fun since Nintendo expanded the range of modes on offer and fixed the god awful lag that plagued Brawl back in 2008. You'll encounter opponents who are new to the game and timid with their attacks, those who are getting better, and those involved in competitive play that will kick your ass if you don't match their skillset. Unfortunately, there's one more category: the spammers. These pests enjoy repeatedly overusing certain attacks while constantly dodging or moving about to result in an unbalanced and irritating fight. Let's take a look at just a few spams, for a lack of a better term, and see how to go about them...

This may seem like a strange choice - shields? How can that be an annoyance? The central issue here is that shields have been ridiculously beefed up to the point where they can make you virtually invincible. You may have moments where you deliver an attack which deals a constant string of damage for a few seconds, and all your opponent needs to do is hold the shield button to avoid all effects. Shields take ages to overload, and by the time you inflict some serious damage on the enemy, the shield will still provide a perfect defence. Consequently, much as in Brawl, shield breaks are virtually impossible.

Countering this must be done with grabs and quick thinking. Unfortunately, when you're forced to do the same shielding strategies, some online games just get dull and repetitive. This mechanic simply rewards even the lousiest of players for holding down a button.

This powerful shield is extremely helpful when you fight monstrously hard bosses like Master Core in Classic Mode, but for online play, it can render many of your attacks useless with minimal effort from the opponent.

Charizard always seems to get the most love of any starter evolution in Pokémon history, being the first legitimate TCG card to have 120HP (compare that with Venusaur and Blastoise's 100HP in the Base Set) and the first to do 100, 200, and even 300 damage respectively. He has two Mega Evolutions, a stellar reputation, and is undoubtedly seen as the most impressive of the bunch. His role in Smash Bros. replaces the Pokémon Trainer from Brawl. Charizard takes his sheer power into the game and Nintendo still want you to know how big a deal he really is.

Though he's an awesome character despite being slightly overpowered, Charizard has some attacks that you may need to keep an eye on, particularly Flare Blitz. This attack sees him thrust at you in a ball of fire, dealing around 30% worth of damage. As a downside, Charizard will briefly trip up and do some damage to himself, but the knockback rate this attack can have on you makes this a minor consequence. It's not too hard to dodge so you always need to keep an eye out for spammers who embrace this attack; once you realise that they have nothing else up their sleeve, finishing them off is easy as pie. But if you keep getting hit, you're a gonner for sure.

Zero Suit Samus is one of the most annoying characters in Smash Bros. history. Her appearance in Brawl was integrated with the suited Samus character; once Samus would release a destructive power beam blast as her Final Smash, her suit would break and she would become Zero Suit Samus; using the Final Smash again afterwards would restore her Power Suit. As a standalone character in this game, Zero Suit Samus has some ungodly irritating attacks that you need to keep an eye on; for pretty much everyone who plays as her does this exact attack setup, every time.

This common tactic is for Samus to grab and throw you into the air, then jump and use her upward aerial attack, which will deliver a surprisingly powerful spinning kick. Many players repeat this tactic when you're on a high percentage, so that throwing you to the top of the screen and using the spin kick will send you straight to your demise. Another frustratingly overpowered attack is her blaster, which can paralyse you from a brief moment when hit, leaving you open to attacks constantly. Afterward paralysing the opponent, players like to once again repeat the tactic of throwing you and delivering the spin kick. Air dodging is a necessity, but when playing online, the slight input delay can make this difficult when Samus moves at light speed. Whenever I see Zero Suit Samus, I prefer to just walk off the stage. 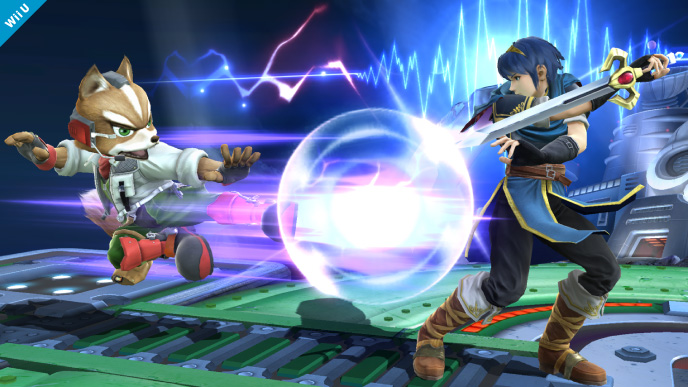 Ugh, fuck this. This is the cheapest, most unfair, and most irritating mechanic in the entire game. Marth, Lucina, Shulk, Little Mac, and Mii Swordfighters are able to counter attacks from opponents via a very simple method: pressing down and B if using the Gamecube controller. Doing this makes them stand on edge for a second or so, and if attacked, they immediately block and strike back with a vicious smash. If you're on a high percentage, you're dead. You can obviously see the pose they stand in when preparing this counter attack, but as the game moves so quickly at times, it may be too late before you even become aware. Hesitating in case the opponent chooses to do it just isn't any fun.

It is possible to avoid and slip past them, but when you get caught, it's game over. 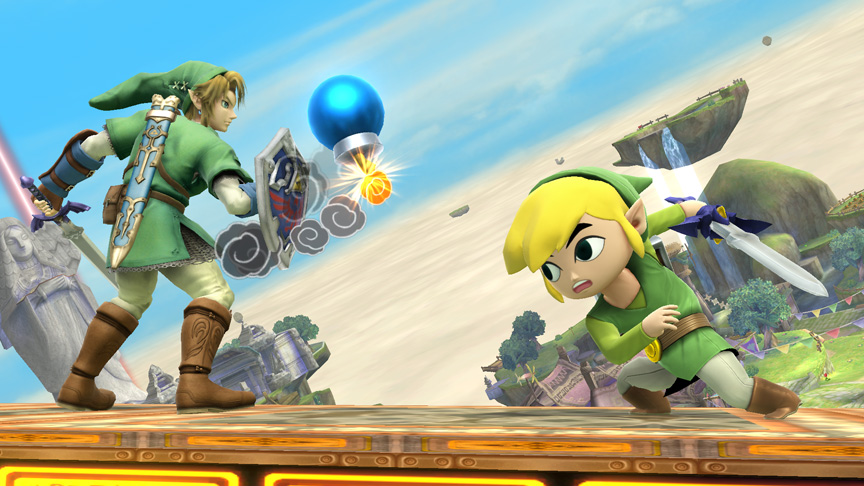 He's got the same moveset he's had since the franchise's inception, and so Link is just as spammy as ever when it comes to online play. He shares this trait with Toon Link, due to their similar play style.

I've encountered so many spamming Links that my sanity comes into question after several matches. These irritating players will do everything they can to avoid you, and continue to use Link's arrows, bombs, and boomerangs from a distance, which will steadily rack up damage. Shielding and dodging all this nonsense is a complete nightmare and just results in a tedious fight that won't be fun for anyone.

You've got me up to like 150%, you can come and attack and stop throwing your fucking boomerang now. Okay?

The level of spammers within the online community is a little large, with people making predictable yet extremely fast combo attacks in a robotic manner. But in all honesty, if you allow people to repeat these attacks then you're leaving yourself open. Wouldn't we all spam such moves if the opponent did nothing about it, allowing us to achieve an effortless victory? Yes. Getting to grips with it allows you to understand a predictable attack plan of an enemy, and then fight back at it with some practice. However, some remain cheap either way.

Thanks for reading!
Written and posted by Comptinator at 6:34 pm