A week ago I began a list which discussed the Pokémon movies. Here we are in the second and final part, featuring the next few movies I watched before I couldn't stand to go any further. Let's begin...

Jirachi Wishmaker already sucks because it focuses on Max, one of the central protagonists in the Advanced generation of the anime - and one of the most annoying to ever grace the entire franchise. The story features the legendary Pokémon Jirachi, who has the power to grant any wish, which a greedy magician named Butler wishes to utilise to resurrect the ancient Pokémon Groudon. Or at least a giant nonsensical clone of it. Or something along those lines.

As I said, Max is the star of the show, and forms a close bond to Jirachi that tries and fails to make you care. It also attempts to develop the relationship between May and Max, who are always seen to be bickering siblings, and to it's credit it does a decent job of bringing them together. It's not insultingly terrible as some of the other films, but Jirachi Wishmaker is repetitive and dull, and most of it's attempts at genuine emotion are painfully cringeworthy. All in all, the film falls flat in it's attempts to be funny or exciting, and the voice acting is generally terrible. Nothing else to say.

Destiny Deoxys focuses on Ash and his friends visiting LaRousse City, a high tech metropolis that's about to kick off an epic Pokémon tournament within it's prestigious Battle Tower. Before this, a strange meteorite had crashed onto Earth, injuring the ozone guardian Rayquaza, and giving birth to an alien Pokémon known as Deoxys. During their time in LaRousse, Ash and the others befriend Tory, a paranoid boy who suffers a phobia towards Pokémon after an incident from his childhood.

This film really sucks. The plot is may be slightly better than the other instalments of this god awful stage of the movie franchise, but the central issues regarding poor animation, lousy voice acting, and ungodly annoying characters are still present. Tory's paranoia of Pokémon is only explored with his irritating shunning of everyone around him, but we never get a deeper insight - his attitude only adds to his unlikeability (is that even a word?). Deoxys and Rayquaza have some fairly cool battle scenes, but when we go back to the main characters, you'll be waiting impatiently to see some proper Pokémon duking it out. That aside, the only enjoyable moments are the brief slapstick scenes with Munchlax. 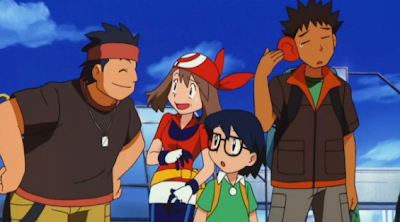 Also, Sid has a deep voice, insinuating that he is a pubescent adult. May is apparently ten years old. Sid thinks May is cute and fancies her. Gross.

Pokémon: Lucario and the Mystery of Mew 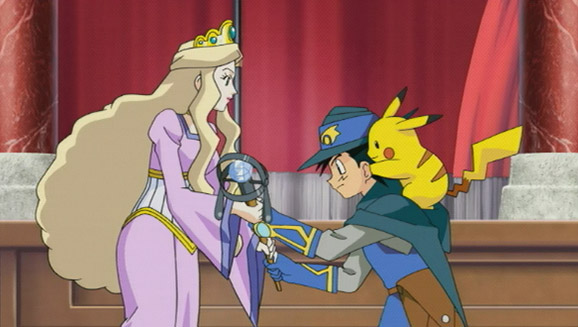 For some reason they felt the need to have Mew back in a new movie, despite already being an ancient, mysterious creature in the first one many years ago. In this film, Ash and the gang arrive at the historical Cameron Palace, which is celebrating the life of Sir Aaron, a legendary hero who stopped a raging war in the past by sacrificing his own life. Sir Aaron wielded the ability of the aura alongside his partner Lucario, which is some magic stuff that I never really got to grips with. But it looks cool.

I forgot half of this film after watching it. Lucario is perhaps one the blandest characters in Pokémon history, thanks to a constant moody tone and a cheesy voice by Sean Schemmel. He and Ash sort of hit it off once their initial quarrels are over, but at this point the film completely fails to generate any emotional resonance. Ash is more arrogant and unlikeable than ever before, and his companions Brock, May, and Max never do anything constructive - they're awkwardly shunted aside, and so fairly useless. The climax is surprisingly good, but otherwise, this film puts me to sleep.

Pokémon Ranger and the Temple of the Sea

While the previous films in this list were just relatively bland, this one is truly offensive and absolutely terrible. Temple of the Sea falls flat due to the complete absurdity and cheesiness of it's central storyline, which focuses on a long forgotten undersea temple that holds an ancient valuable treasure known as the Sea Crown. Founded by the people of the water a long time ago, the temple is hidden away in the ocean depths, and now Ash and his useless friends team up with a group of Pokémon Rangers and sailors to unearth this secret using the legendary Pokémon Manaphy. They must also evade capture from the villainous pirate Phantom, who seeks to claim the Sea Crown and all it's riches for himself.

Yeah, it's as stupid as it sounds. The film's main focus is the relationship between Manaphy and May, which develops into an almost maternal bond as the film goes on. It never truly gets the emotional focus going, instead showing us scenes of May crying, generic glowing anime eyes, and countless rehashing of 'love you', a phrase May and Manaphy never seem to stop saying to one another. The cast is the replacement Pokémon USA lineup introduced in the Battle Frontier series, so while we have some improvements, the majority of the voice work is embarrassingly poor (count the amount of times May gasps in the film). The supporting characters are completely uninteresting, and the animation is absolutely putrid - with some horrible CGI shots and rendered vehicles that look completely out of place and unfinished. Bottom line, this is a really crappy movie.

I could not bare to watch anymore movies after this one, so I'll call it quits. Pokémon to me will always be the games, and the original anime seasons - none of this nonsense.
Written and posted by Comptinator at 4:49 pm