Why Job Applications Suck - The Sequel 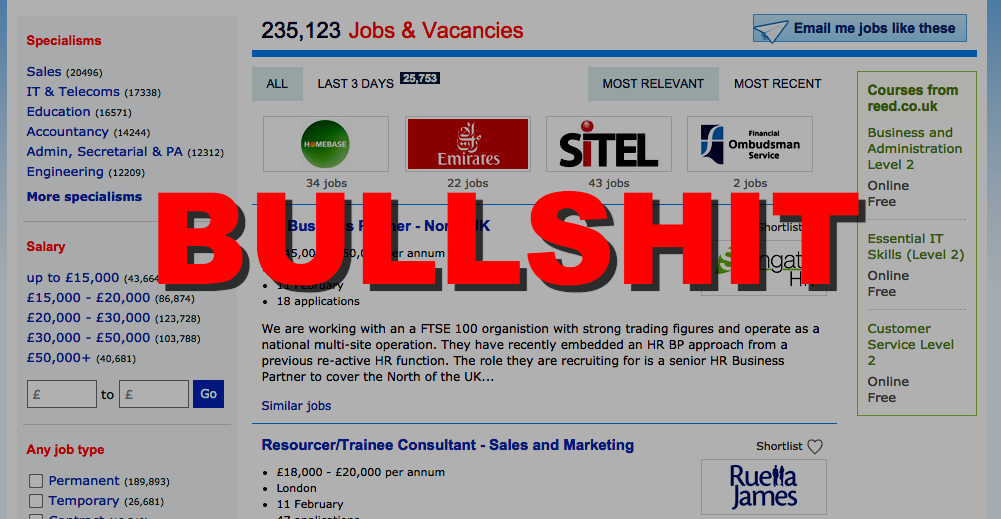 Back in July 2013, I made a small blog post about how applying for job is absolutely miserable. When hours at my previous job were badly slashed, I was forced to return to the nightmares of searching for a new one. The lengthy search paid off, but not without endless hassle. Having gained more knowledge on the awfulness of job searching on my quest, I feel now is the time to write a second passage as to why job applications really suck.

Job sites. Potential ways for struggling people to find a new career; seems ideal. No. Too many of these sites, be it Directgov, Reed, or CV Library, are over saturated with shady jobs by virtually non existent 'marketing and PR' companies that ask for an immediate start and care not for your qualifications. These relatively unstable looking jobs continue to plague these sites in favour of genuine jobs that would fuel an applicants chance to progress within a well known company. As a result, the sites become virtually useless when you're searching for a proper career.

I HATE GROUP INTERVIEWS. SO MUCH. My central situation was that I had interviews with a number of big name companies, including O2, Barrymason's Law Firm, Cineworld, and even the Apple Store - but never got the jobs! Now for the Apple Store, a group interview took place at nice four star hotel; which consisted of sitting in a room with several other applicants before some incredibly smug Apple employees with ridiculous beards. They sit back in their seats, wearing their casual outfits and saying how Apple is such an amazing company to work for. Apparently you have more chance of getting into Harvard University than the Apple Store, so being turned down from this role came as no surprise.

Zero hour contracts are the most corrupt things in employment history. Referring back to my Cineworld interview, the position was advertised as a full time role. FULL TIME. Now, when the interview took place, the manager promptly said that it was a zero hours contract but he would promise to give potential employees at least 30 hours each week. Of course he would say that. Do you think he would say 'you may get some hours for now but if the money declines then you won't have any'? No. He wouldn't. It's just leading applicants into a potentially promising career with flat out false advertising. These contracts offer maximum flexibility, but also allow employers to abuse the system to make sure they get as much profit as possible, not caring for employees who desperately need more work to afford, you know, their life?! Many of them also demand you to work on extremely short notice, which causes unfair strain on your personal life. Maybe negating them is one thing Labour will do right if they take office in May.

We're not done with Cineworld. The group interview there consisted of some 10 or so applicants sat around a table. We would watch a brief presentation of Cineworld bragging about their incredible reputation. Now what comes next you will not believe initially, but I swear on my life it is the truth. They passed around a hat of jelly babies and requested that each person pick three of them. Depending on what colours you had, you say something about yourself; green jelly babies might be your favourite song, red your favourite film, or orange your favourite book. I am dead serious. The only positive outlook on this ridiculous situation is having free sweets. I have never seen such a silly gimmick in all my life.

Maybe I should've titled this post that Cineworld applications suck. But no. Now it's time to expand. You know what the most annoying, patronising, and unjustified actions in the history of job interviews is? I have experienced it many times; the employer phoning you, praising your confidence and saying how much they really liked you - before saying you were unsuccessful. It's extremely rude to lead an applicant on like that; this lousy effort to ease their disappointment is just patronising and inappropriate. When an employer tells me this, I just want to break their nose.

Oh, excuse my language. Also, I am not unemployed. If you suffer my former agony, then keep trying, and things will get better.
Written and posted by Comptinator at 5:12 pm