RETROSPECT - Most Anticipated Films of 2015

When the year commenced, I posted my five most anticipated films as I usually do.

Now, after seeing Star Wars just last week, every film on the list has been seen. So, traditionally, here is my retrospect, rearranging each film in terms of actual quality and how it compared to my original expectations. Let's commence...


Marked as one of my most anticipated movies of the year, Age of Ultron was nothing but a miserable disappointment upon arrival. Despite being enjoyed by most, things just didn't quite click with me as I watched the narrative struggle along from the get go into a messy sequence of poorly timed gags, pointless sub plots, and almost no scaled down focus. Plot threads are tossed everywhere, jokes are made at even the most inappropriate of times, and theres simply no emotional connection between any of these characters. Performances are generally less interesting than in previous MCU films, and while James Spader does a great job with the fantastically animated Ultron, he's such a bland villain that all this talent ultimately goes to waste.

The action is exciting as always, but even that drags on; and as everything is so poorly drafted, the actual reason as to why the Avengers are undergoing another epic fight is seldom explored. I can see why others enjoyed it, but for me, it's another beyond mediocre entry to this recently mixed franchise.


Spectre comes off the heels of 2012's Skyfall - heralded by many critics as the best Bond film in recent times, and also the highest grossing one with over $1 billion in box office receipts. In this sequel, the titular organisation comes to the big screen for the first time in over forty years, with acclaimed actor Christoph Waltz starring as the new villain.

With plenty of pulse pounding action scenes and another strong performance from Daniel Craig, Spectre manages to transcend it's occasionally thinly written narrative and lack of character development. The disappointment from critics seems similar to that of Quantum of Solace, which gained similarly mixed reception after failing to rival the standards of it's predecessor, Casino Royale, back in 2008. Here, although Spectre can't match the enormous heights set by Skyfall, there's no denying that this is still a thoroughly entertaining modern action flick, with an interesting, if again thinly scripted narrative, thrilling set pieces, and a lineup of fine performances from a well chosen cast.

Could The Force Awakens be on it's way to being the highest grossing film of all time? Who knows. Topping $2.7 billion worldwide to surpass Avatar will not be an easy feat, but with $544 million in domestic earnings just over a week after release, rivalling Avatar's $760 million US haul seems more and more achievable. The first Star Wars flick released in a decade has got fans and non diehards alike overloading theatres to catch one of the biggest movie events of all time, and there's no sign of any disappointment for most.

The Force Awakens is a tale that unites the classic Star Wars trademarks, and characters including Han Solo and Luke Skywalker, alongside fresh ideas and characters into a narrative that's stocked with thrilling action scenes, plenty of dazzling effects, and a blistering sense of fun and scale. It's epic to say the least, with an impressive villain and a lineup of superb performances from a loveable cast of newcomers. Humour is occasionally poorly timed, given the context of certain scenes, but thankfully this doesn't adopt any traits of "dark and gritty" blockbusters; so, at the end of the day, it's not only surprisingly complex, but also great fun for audiences of most age groups.


There was no denying that Jurassic World was going to be a success - but the amount of records it broke was bombastic to say the least, and now it sits proudly as the fourth highest grossing film of all time. The first entry to the franchise in 15 years, Jurassic World sees John Hammond's dream come to life at last as a fully operational dinosaur theme park is constructed at Isla Sorna as he had originally envisioned. However, not to give anything away, but a decision made by the park staff to reignite visitor interest gravely backfires, putting everyone in danger.

Chris Pratt stars this time round, and only B. D. Wong returns from the original films as Doctor Henry Wu, so everything's freshened up for a new audience. It treads over the same plot points as the original classic, and may not impress some people as a piece of original storytelling, but an interesting insight to the behaviour of the creatures in the park, as well as important (if a bit generic) themes of excessive consumerism help to build upon the ideas that it's predecessors expressed. Couple that with a well rounded cast, excellent visual effects, and some tense, thrilling action sequences, and Jurassic World is finally the sequel that does the original justice. 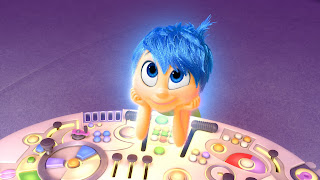 Inside Out is Pixar's latest original tale based on the lives of emotions that dwell inside our head, and how they operate our daily lives. The main character is Riley Anderson, whose five emotions Joy, Sadness, Anger, Disgust, and Fear try to guide her through the struggles of moving to a new home across the country. Things take a turn for the worst when Joy and Sadness are whisked away into the depths of Riley's mind, leading to a breakdown within Riley herself that must be fixed before things worsen beyond measure.

It's a beautifully animated, smartly written, and breathlessly constructed narrative that's full of passion and heart, with a host of loveable characters that are flawlessly voiced by a lineup of fine actors, including Amy Poehler, Lewis Black, Bill Hader, Mindy Kaling, Phyllis Smith, and an impressive performance from young newcomer Kaitlyn Dias as Riley herself, as well as Richard Kind as imaginary friend Bing Bong. The story is penned in a way that can be followed in a simple manner but also in a way that has so much complexity deep down, delivering a touching message about growing up and accepting changes in life; ideal for the younger audience and one thats surprisingly nostalgic for adult viewers. This film was actually number five on my anticipated list, and now here it is at the very top; I hoped it would be Pixar's major return to form, and it certainly did not disappoint whatsoever.

Thanks for reading! Have a Happy New Year!
Written and posted by Comptinator at 4:12 pm