Movie Review - Teenage Mutant Ninja Turtles: Out of the Shadows 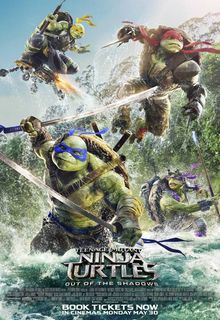 The Ninja Turtles franchise dates back to the Mirage comic series originating in 1984, and since then has spanned numerous television shows, video games, and, of course, movies. The original trilogy kickstarted the live action side of things with guys in bulky suits portraying the titular heroes, but with modern cinema boasting newfound, dazzling potential when it comes to special effects, the rebooted installment two years back brought CGI into the mix - but outside of such impressive visuals, it's fair to say most other things sucked. Less than two years on, a clearly rushed sequel has arrived in the form of Out of the Shadows; and while the majority of critics have claimed it to be a superior effort, I myself just cannot see how this is the case in any way whatsoever.

The plot (if there even is one) sees the Shredder (Brian Tee) returning to wreak havoc following his initial defeat; however, this time he finds himself teaming up with the monstrous Krang (Brad Garret) from Dimension X, who shares Shredder's lust for world domination. Alongside evil genius Baxter Stockman (Tyler Perry) and clumsy yet powerful thugs Bebop (Gary Anthony Williams) and Rocksteady (Stephen Farrelly), Shredder and the Foot Clan launch their next deadly attack on New York, which the turtles, joined again by April O'Neil (Megan Fox) and Casey Jones (Stephen Amell), must put a stop to before time runs out.


Out of the Shadows doesn't even try most of the time; the plot cruises along at a messy pace, at times feeling like it's a parody of its own genre. Yes, this is a movie featuring talking turtles and a giant pink slobbery alien in a metal suit, but that doesn't excuse every flaw - character motivations often make little to no sense, logic is dispensed in the most dire situations, and there are times when the villains only get away with their evil deeds due to the idiocy of the protagonists or obvious plot holes - for example, a worrying lack of cameras in public areas to record evidence of all of these major attacks, and police officers who seem incapable of just firing their guns. It's hard to pinpoint just how dreadful some of the writing is without going into major spoilers, but it's fair to say that it feels like the script was penned with little to no thought on genuine quality, but just to try and drag in fans by stuffing in all kinds of retro villains and references whilst not focusing on any authentic narrative requirements.

Bringing in classic characters like Bebop, Rocksteady, and the much loved Krang seems like an awesome idea, especially when modern day effects can bring out the best in them - but this is all but false hope. In reality, the characters not only look fairly putrid in their visual design (well, Krang looks okay), but their personalities and choice of performers are both utterly abysmal. Bebop and Rocksteady have gone from the goofy yet loveable villains in the original series to annoying thugs who pride themselves on making endless jokes based on flatulence, weight, binge eating, and, for reasons unknown, genital size. As for Krang, voiced by the dramatically miscast Brad Garrett, he's gone from an evil genius to an obnoxious moron, with little to no development and no real purpose - his presence is belittled and rendered meaningless, which is a real shame considering his amazing history. As for Shredder, he wanders around with an expressionless face spouting dialogue that I guess is supposed to be eerie and powerful, but in the end even he's naught but a generic baddie that lacks any intellect or true power.


The turtles themselves also have no real chemistry or development throughout the film, with the script falling back on their cardboard cutout personalities and going down generic character arcs as the story goes on - only providing more evidence that this was all an afterthought from start to finish, with the handsome salaries at the end of it being the main focus. Despite some fun action scenes, the abundance of plot holes, atrocious villains, painful attempts at humour, and a soulless, messy script render Out of the Shadows most certainly one of the worst films I've seen in a very long time.

One of the only good things was CD9's cover of Turtle Power in the end credits. And it's not even on the official soundtrack!
Written and posted by Comptinator at 4:49 pm