Super Mario Odyssey is on the way, and to say I'm hyped would be a vast understatement. Since his arcade debut as Jumpman in 1981, Mario has long been Nintendo's iconic mascot and one of the most renowned heroes in the gaming industry; his reputation certainly precedes him with some of the best games on offer to audiences of all ages. Without a doubt his 3D outings remain just as iconic as his famed 2D ones, and it goes without saying that all have maintained a consistent streak of quality over the past two decades.

So this list sure wasn't an easy one to form; but now let's rank all of Mario's main 3D adventures, all of which adopt their own innovation and offer some of the best experiences on their respective platforms. 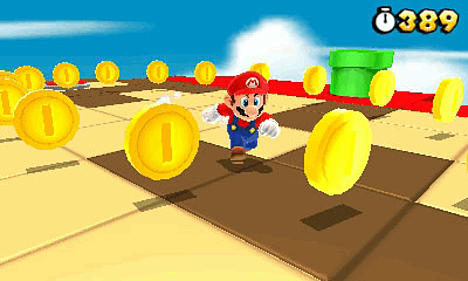 A simple yet strong effort for Mario's main 3DS debut, Mario 3D Land deftly blends the straightforward structure of the 2D classics with the complexity of his 3D efforts; the end result is a game that offers an addictive and well designed platforming experience approachable for loyal fans and newcomers alike. Its first admirable factor are of course the visuals which are certainly some of the best the 3DS has to offer; full of colour and vibrancy, and with the simple yet insanely appealing art direction Mario's finest works are always known for.

Yes, 3D Land isn't quite as memorable as Mario's other 3D efforts, largely due to it being a tad short lived and not full of as much innovation to give it the same impact other titles have boasted. Despite this, there's still no denying that it's one of the best 3DS titles even half a decade on. 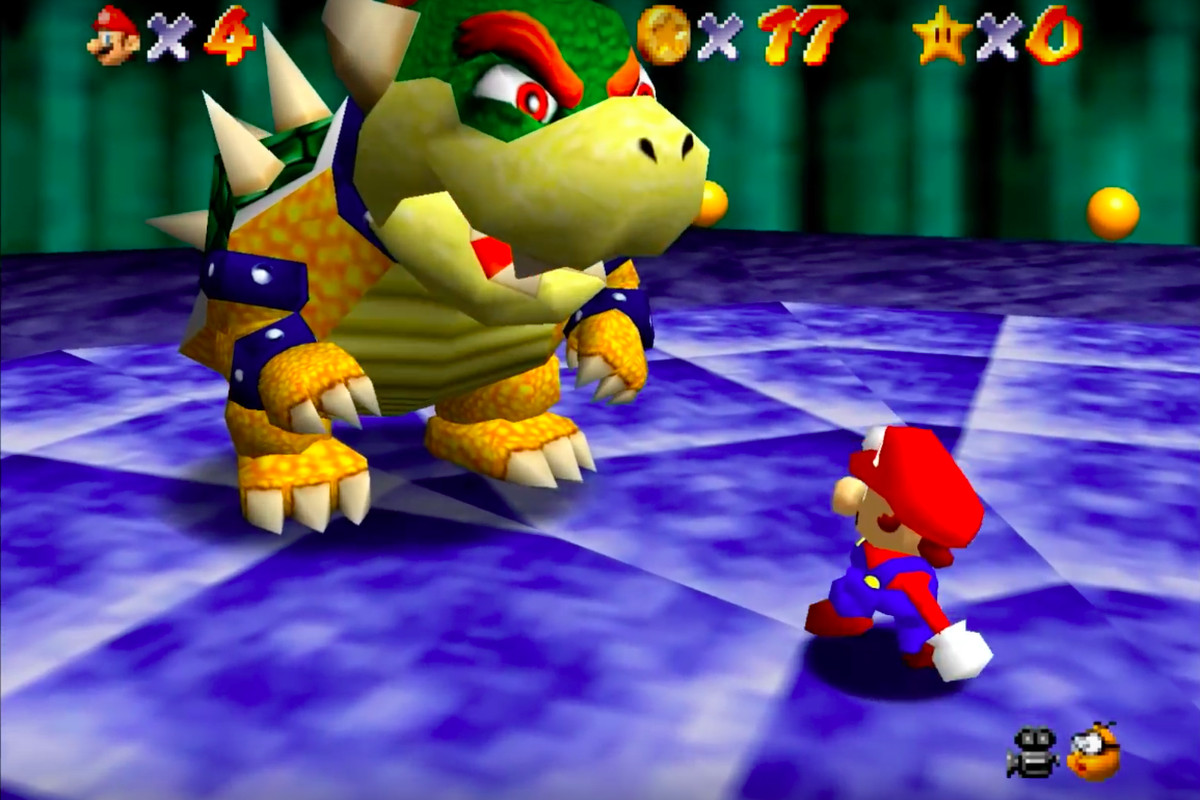 Mario 64 being so low on this list may not click with many of you I imagine; however, I must emphasise once more that these games are largely even in terms of quality, and so I still find this to be a great game nonetheless. It already wins points for being such a benchmark in the platforming genre, pioneering and refining conventions such as complex analogue control and a 3D camera system. It's also quite remarkable how well the experience has aged; even two decades later, revisiting 64 never feels like an outdated experience and it remains just as fun as it was way back when.

What makes it such a great experience is the expansive structure most levels boast, promoting exploration without feeling too vague in their design. It's bags of fun to just mess about within each stages' most intricate areas, allowing you to locate more and more secrets in the process. It's also pleasing just how much variety the game offers, with stages ranging from colourful yet chaotic battlefields to soothing harbours to a tall, tall mountain (literally). There's plenty of fun and variety on offer, and the game's influence on the industry alone makes it something that will never get old.

The DS remake, somewhat awkward controls aside, is also a respectable update; being able to play such a masterpiece on the go already makes it worth having. 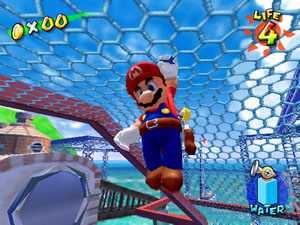 Mario Sunshine is a title that yields some more mixed reactions within the fanbase. It's a great game, no doubt, but a slightly stronger focus on story didn't quite work in the eyes of many, and the occasionally savage difficulty wasn't always appealing when trying to reach an 100% completion.

Sunshine's story sees Mario on vacation at the gorgeous Isle Delfino resort, yet he quickly finds himself framed for polluting the island's beautiful locales and is forced to clean up the mess whilst also tracking down the real culprit. It's not a poor story, but is perhaps just a bit hard to connect with considering the blatant idiocy of Delfino's native Pianta's and the incredibly cheesy cutscenes. That aside, Sunshine is still one of my favourite GameCube titles; notably impactful as I'd dub it my first true experience with the plumber, considering I was more into the Sega Genesis and PlayStation during past generations.

The new Isle Delfino setting allowed each stage to be fresh in terms of design, and their expansive structure once again promotes a lot of exploration; it's just as fun to put the main quest aside to goof off and locate more and more secrets. The integration of FLUDD, Mario's water backpack, also stirs up the experience. FLUDD's various nozzles allow you to not only take care of foes and hazards with blasts of water, but also navigate large over gaps and zoom up to higher locations. The game's aforementioned difficulty perhaps could've been toned down a little, and you may certainly wish the characters didn't open their mouths during most cutscenes, but Sunshine is still one of my favourite Mario titles to date.

Branded one of the best games of all time by critics and audiences alike, Mario's debut on the Wii ten years ago now certainly helped prove Nintendo wasn't just trying to milk the casual market with their latest and most controversial console. Indeed, they were still the same genius game developer that we all knew and love within, capable of making some of the best first party titles across all generations of gaming. Galaxy deserves strong acclaim simply because of how much ingenuity the developers injected into the experience; as the title suggests, Mario is now whizzing into outer space to stop Bowser yet again, and such a setting of course paves the way for some of the most innovative level design to ever grace the series.

The various galaxies Mario explores adopt all kinds of themes: beaches, gardens, volcanoes, you name it. We've seen similar stuff in previous Mario titles, but the fresh design in Galaxy's most notable stages make them far from repetitive. The overall aesthetic helped show the Wii as something very capable of impressive modern graphics, even if it lagged behind its rival consoles. As well as visually stunning, each level is also packed with depth; while the design is arguably more linear than that of 64 and Sunshine, there's still a lot of fun to be had as you explore more and more of each world. The game's a bit too easy at times, but that matters not when Ninty have still crafted a masterpiece that will never lose its appeal.

Oh, and that music...enough said. 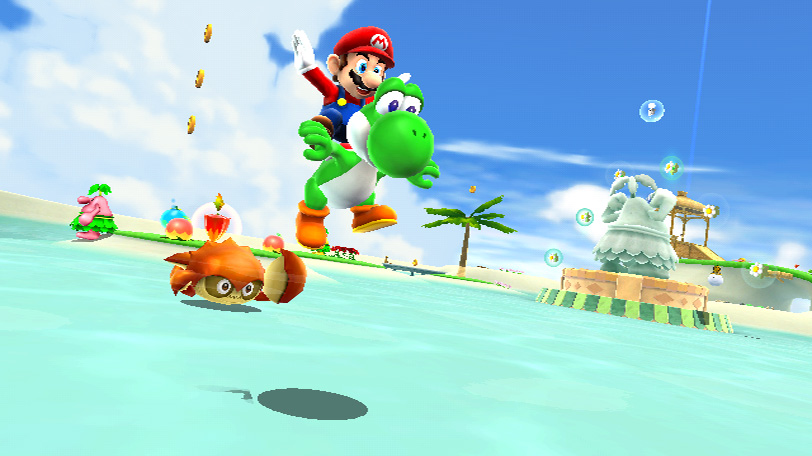 The Wii became such a gargantuan hit and enjoyed such a long lifespan that there was even time for two main 3D Mario games. With so many ideas that they couldn't possibly squeeze into the original, Nintendo came back for the first main sequel in Mario's 3D history, building upon an already stellar formula with some neat little additions and of course an onslaught of new, equally absorbing levels. Of course, the most notable addition at first glance is the return of Yoshi, who makes his first 3D Mario appearance since Sunshine eight years prior. He's a little underused, but the inclusion was still a great design choice, and he's far more enjoyable and less fiddly to play as compared to his Sunshine gameplay. He ultimately paves the way for more and more creativity during his main segments in many levels.

Galaxy 2 also streamlines the experience a little more by featuring a much smaller hub world and a simple world map to connect each level. It may seem disappointing to not have as much freedom initially, but this is a minor concern when the game's fluidity is seriously aided by this new, simpler approach. Aside from these tweaks, Galaxy 2 doesn't dramatically alter the experience offered by its predecessor, but this is certainly good thing as of course if something isn't broken, it shouldn't be fixed. The new stages and missions offer plenty of fresh challenge and innovation, yet the game still adopts the same stellar visuals and fluent controls that the original game demonstrated. The outcome? Certainly that rare superior sequel. 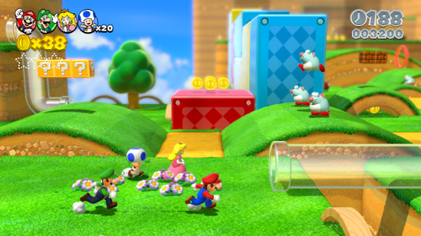 Though certainly considered one of the Wii U's best titles, Mario 3D World wouldn't be most people's choice for the best of the plumbers 3D outings. Most still seem to love it, but just not as much as past efforts, considering the resounding influence many of them had on the platforming genre.

But alas, whilst it took me a lot of thought due to the franchise's consistently refined quality, 3D World still has to be my pick for the best of the best. The game adopts the same format as 3D Land, with timed, somewhat linear stages, but builds upon it with a dozen new ideas of its own: a world map more open to some exploration, more and more thoughtful concepts within each level, new power ups, and of course a multiplayer mode that makes the experience over ten times as fun when shared with friends. The multiplayer may make things a bit too overcrowded during later stages, but it remains one of my favourite aspects of 3D World's experience, and it's nice to see some later levels actually designed with it in mind to allow you to unlock new secrets and pathways alongside your teammates.

It also goes without saying that on a visual and audial level, 3D World remains true to the series' high standards, boasting some of the Wii U's most crisp, vibrant graphics and a soundtrack that is without any forgettable tunes. Whilst I look forward to Odyssey returning to the more open world design, 3D World again proves that a more linear structure can still offer plenty of its own depth, and can be just as engrossing throughout.


Thanks for reading!
Written and posted by Comptinator at 6:09 pm