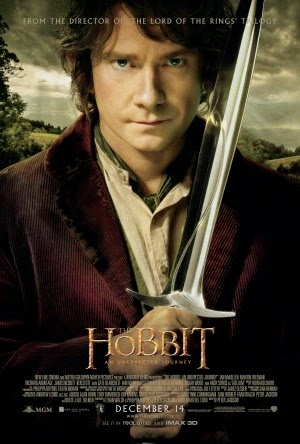 The recent decision to turn J.R.R Tolkein's classic children's novel The Hobbit into a three part fantasy epic was met with great controversy - unlike its similarly three part predecessor, Peter Jackson's next venture into Middle-earth is fuelled by considerably less source material: a 300 or so page light hearted adventure over a 1000 page three part high fantasy. Controversy aside, Jackson's first installment to this annualised trilogy has finally arrived: with a whopping 170 minute run time, can it possibly justify the pacing and material?

Taking place sixty years before the events of The Fellowship of the Ring, An Unexpected Journey delves into the adventures ageing hobbit Bilbo Baggins (Ian Holm) has yet to tell his nephew Frodo (Elijah Wood) - of when the great wizard Gandalf the Grey (Ian McKellen) and a band of thirteen dwarves lead by Thorin Oakenshield (Richard Armitage) invite a young Bilbo (Martin Freeman) to join them on their quest to reclaim the stolen dwarf kingdom in the Lonely Mountain and lay siege to the terrible dragon Smaug who stole it from them, along with their hoards of jewels and gold, many centuries before. As the Company reach the Goblin stronghold amongst the Misty Mountains, Bilbo encounters a strange being dubbed Gollum (Andy Serkis) and an enchanted, golden ring which will change his life and the fate of Middle-earth forever.

An Unexpected Journey is visually stunning - a terrific blend of intricate sets, fantastic locations and polished CGI work makes Middle-earth more pleasing to the eye than ever before. Complaints have been prominently targeted at the overuse of CGI - but does it truly detract from the tangible nature of this world? Not entirely. It's never going to mimic the organic values of natural special effects, but the animation featured throughout Jackson's newest Middle-earth installment is as excellent as the practical sets. The creatures are injected with a great deal of life and charisma thanks to fantastic motion capturing and synthetic detail, and each fictional landscape is as beautiful as the last. While the 3D is a wasted and far too conservative quality, the film and its expansive landscapes grouped with sweeping camera shots truly evolve into something incredible on an IMAX screen. Howard Shore also returns as composer, and creates a musical score that is possibly superior to anything we've ever heard from the Middle-earth film franchise.

The Lord of the Rings films, in most cases, carried hefty run times that you rarely noticed. The story flowed in a swift fashion and most scenes felt crucial to the narrative, even if things felt bloated at times. An Unexpected Journey naturally cannot mimic this, and such a trait will undoubtedly plague its successors. Much like Jackon's previous adventures in Middle-earth, the film almost tops three hours in run time, and this simply doesn't feel natural as many scenes feel bloated and sluggish and the pacing is purposely slow to cram in as much detail and backstory as possible. Interweaving content from the appendices Tolkein penned at the conclusion of The Return of the King, the film incorporates substantially more backstory and interlocking events than its source material, and many character roles are extended and built upon which works in some cases, and fails miserably in others. You do truly feel the run time of this fantasy flick, and that is never a good thing when it's this long.

The narrative is also very episodic - hear me out. The overall film feels like it's own adventure, which may seem like a praise. But in actual fact, it makes the overall story feel like an unnecessarily long quest, which is simply not what the source material offers. Smaug is not the antagonist of this film - you rarely even see him, and this structure does not work for a film of such a simple story. The characters exude plenty of charm and the acting is universally superb, but it is difficult to keep consistently engaged with a slow paced storyline that exploits the rich context of its fictional universe in a way that feels somewhat boring. An Unexpected Journey is a visually rich and explosive effort from Jackson, and its characters are arguably one of the most impressive factors, but the sluggish pacing and unsatisfying conclusion (not to mention having to wait another year to even see the actual bad guy - well, dragon) make it less of impact compared to its decade old brothers.

Written and posted by Anonymous at 9:55 am