The Best (or worst?) Disney Deaths

We tend to think of Disney as child friendly, but compared to their competitors in the past like Don Bluth and even Dreamworks, they mastered a superb art: portraying disturbing things without outright showing them. One of the best examples of this is almost every Disney character death; some are incredibly gruesome and others freaky, yet they're portrayed in subtle ways to still make the films open to child audiences. As proof of my words, let's take a look at some examples...

Watch the films in question before reading, but to be honest if you haven't already then shame on you! 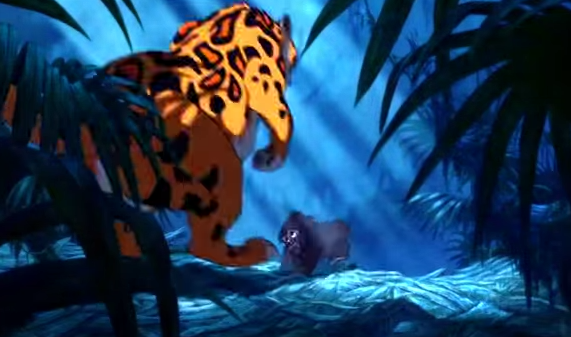 A Disney death that not a lot of people may remember is that of Kala and Kerchak's son at the beginning of 1999's Tarzan. Wandering off in the night to chase a frog, the little chimp encounters the notorious leopardess Sabor, who chases her prey across the jungle, quickly catching and killing it. Nothing is shown outright; the chimp is seen running, and the shot above ends with Sabor jumping in front and then into the bushes. As a kid I'm thinking 'oh no, Sabor is chasing the little guy into the jungle!'. It's only as a teenager that I realised the bushes cover the chimp in her mouth, and that she is carrying it off to rip it apart for dinner. Damn, Disney. 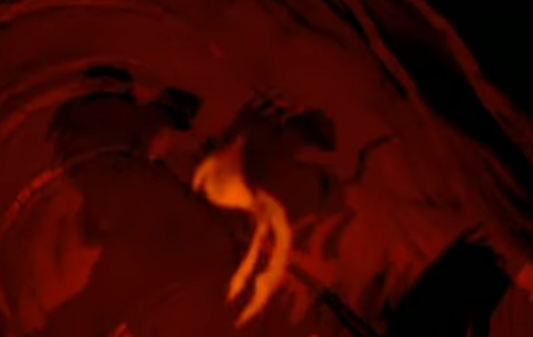 Moments before fighting his nephew Simba, Scar betrays his hyena followers by blaming them for Mufasa's death and the subsequent downfall of the Pride Lands. When Scar loses the battle, he is relieved to see his hyena subjects before him; that is until they admit to hearing his betrayal and surround him with ravenous hunger. We see Scar beg for mercy as the hyenas close in, but Disney once again convey a frightening death with effective censorship. The camera soon pans up, and we only see the hyenas pounce on Scar in the form of their giant shadows as they maul him alive. My child reaction? Yeah, the hyenas destroy Scar! My adult self then understands how gory and shocking this death really is in theory, but Disney portray it in a stylistic way to once again make it family friendly. Or at least as family friendly as this kind of death can get... 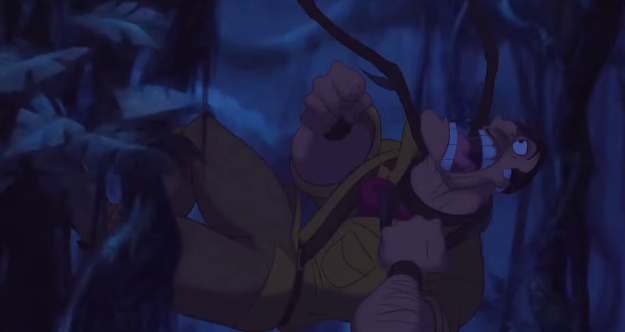 Back to Tarzan - quite easily one of Disney's most dramatic films to date. The villain Clayton proceeds to fight the titular hero amongst the jungle treetops, but is soon trapped in a mishmash of vines. He mindlessly slashes his way out but cuts one too many; the vines are unable to support his weight and so he falls and falls, until a vine coiled around his neck tightens, effectively hanging him. Much like with Scar's death, an extremely violent and disturbing scene is conveyed with shadows - after a shot of the vine straightening and the sudden absence of Clayton's screams, a torrential storm begins - lightning strikes briefly illuminate the jungle, revealing a silhouette of Clayton's hanging corpse. Yikes. 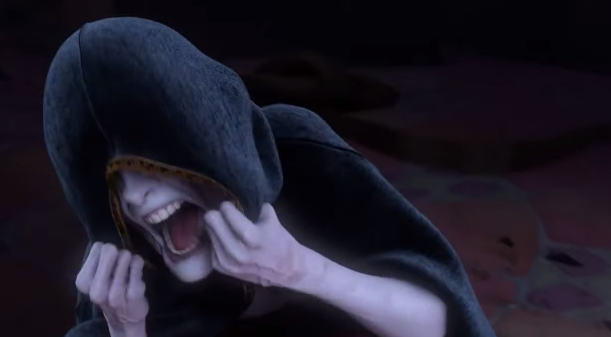 A dying Flynn Rider slashes Rapunzel's hair, destroying its healing abilities which Mother Gothel exploited to remain permanently young. With Rapunzel's hair gone, Gothel begins to wither and decay. Her skin wrinkles and her hair turns grey as she slowly dies - a shot of a broken mirror obscures her disturbingly pale face, and she soon covers it with her hood. She continues to rot away, tripping out the window and turning into dust by the time she hits the forest floor. Without being too violent, this death is still extremely frightening as we see Gothel morph into an frail ghostly figure; it's like something straight from a horror film. For kids!

The Princess and the Frog - Facilier 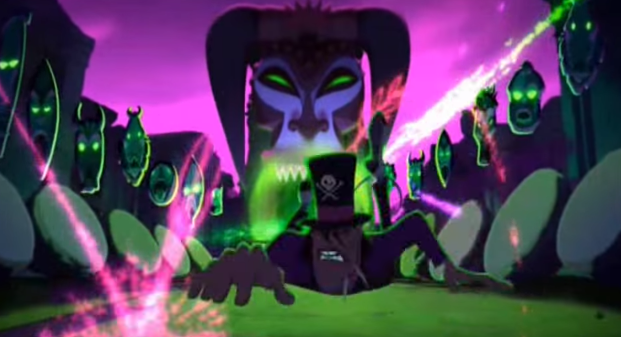 The magician Doctor Facilier needs to round up the souls of New Orleans to pay back a debt to his voodoo masters, but when Tiana destroys the talisman that's essential to Facilier's plans, his friends on the other side take him as payment instead. A huge voodoo mask opens up and reveals a green realm within. Shadows then grab Facilier by his legs, and despite his pleas for mercy, he is dragged away into hell and silenced forever. After everything fades away, all that's left is a gravestone with his screaming face attached. Not a physical death and certainly not a gory one, but still pretty freaky, especially when the voodoo shadows throughout the film were already scary as can be anyway.

The Hunchback of Notre Dame - Frollo 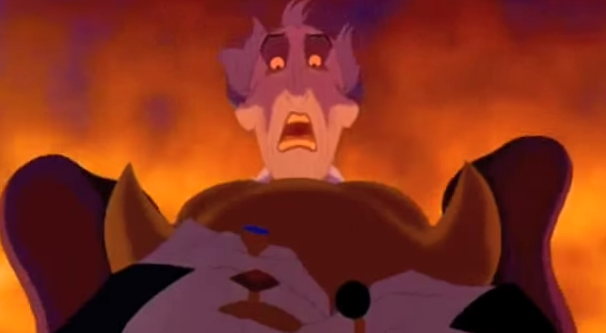 One of Disney's most epic deaths is that of Frollo, Quasimodo's evil mentor in The Hunchback of Notre Dame. After chasing Quasi and the gypsy Esmerelda into the titular cathedral, Frollo leaves Quasi hanging for dear life at the edge of the balcony while he swings to a nearby gargoyle. Balancing on the stone and preparing to behead Esmerelda, Frollo stumbles and comes face to face with the gargoyle's frightening stare, before it breaks off and plunges him into the lava below. As a kid, this death seems badass - the asshole Frollo falls into a sea of lava and gets what he deserves. But as an adult you start to understand just how scarily symbolic this scene is, referencing hell and Satan himself, sending Frollo to a place where he will pay for his evil deeds for all eternity.

Quite possibly the most talked about Disney death is Bambi's mother. While her and Bambi graze in a snowy field, her ears perk up and she looks around, sensing danger. Without warning, she quickly ushers Bambi to run to the thicket. The tension rises as Bambi retreats, his mother yelling at him to not look back but to keep running and running. Bambi rushes off to safety, but just as he does we hear a gun shot. He keeps going until he realises his mother is no longer following him. After failing to find her in the isolated woods, his father, the Great Prince of the Forest, appears before him and tells him his mother is gone. The drama here is just perfect - everything from the goosebump inducing chase scene to the eerie sad music to the cries of Bambi as he looks for his mum. A truly manly man would have to punch a wall immediately after watching this scene. 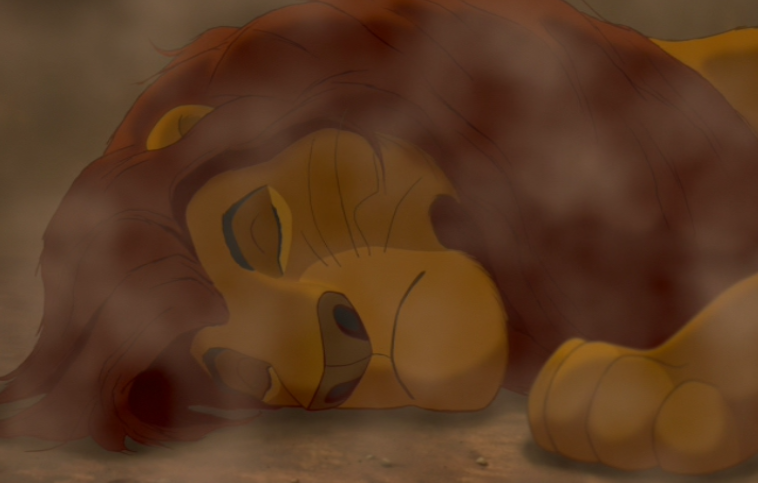 Tied with Bambi's mother, the most heartbreaking Disney death is of course Mufasa in The Lion King. After saving his son Simba from a chaotic wildebeest stampede, Mufasa finds himself hanging before his brother Scar on a cliffside above said stampede below. Wanting to become king of the Pride Lands at any cost, Scar mercilessly throws his brother back into the gorge where he is promptly trampled to death. Mufasa's screams are joined by Simba's as he falls to his death and, when the stampede ends, Simba climbs down to find his father. All he finds is the corpse, which he desperately tries to awaken. But Mufasa is gone - and all Simba can do is curl up beside his father and wait to perish himself. Scar arrives and blames Simba for what has happened, showing absolutely no regret for what he has done, thus making his eventual downfall all the more satisfying.

Disney is fucked up.

Thanks for reading!
Written and posted by Comptinator at 7:37 pm