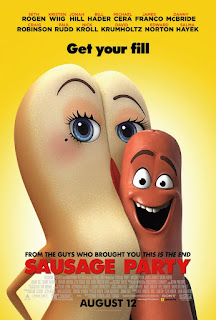 When it comes to adult animated entertainment at the cinema, little is present, and what is available is often the product of franchises such as The Simpsons or South Park, which hold lengthy heritage in the world of television. With this year's Sausage Party, an ensemble work from directors Conrad Vernon and Greg Tiernan and co-writer/producer Seth Rogen, a new milestone in cinema has been reached: the first R rated CGI animated flick in history, and something that may be set to continue thanks to its respectable success from a critical and commercial perspective as well as ongoing interest from audiences and producers alike.

Sausage Party takes place within the supermarket of Shopwell's, where the anthropomorphic food products within eagerly await the day they are purchased and taken to "the great beyond", a mythical paradise residing outside the shop doors. One such item is the hot dog sausage Frank (Seth Rogen) who, alongside his hot dog bun girlfriend Brenda (Kristen Wiig), dreams of the day he to is bought by the "gods" and taken to his long awaited great beyond. When his dream is nearly complete, a terrible incident leaves him lost and outside a package on the shop floors alongside Brenda and several other newly met companions, soon after they discover that the great beyond may not be as heavenly as they thought it to be. 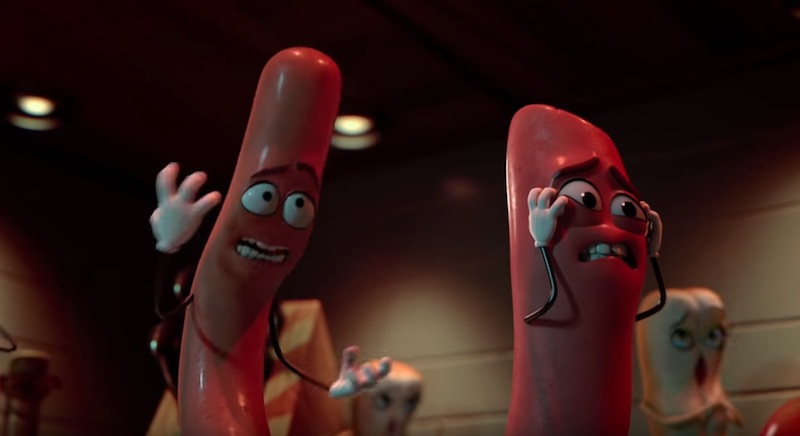 The film then follows Frank and the others on their journey to return to safety whilst also discovering the truth behind "the great beyond" - essentially, as many plot summaries have implied, it leads the foods' own discovery of how they are indeed devoured by the human "gods" once purchased. What has to be mentioned immediately is that Sausage Party is incredibly, incredibly offensive and profane - the trailers indicate this with a few F bombs and some generic foul lingo, but this is extremely tame compared to what the entire film has to offer. Indeed, the amount of swearing is insane, but it also has a great time with rapid references to sex, drugs, and god knows how many other offensive gags that exploit all sorts of stereotypes and taboos. It's going to offend some people for sure, but this is more than a brainless slew of grotesque remarks and references - there is wit behind it all, and the comedic timing adds an effective, increased layer of shock value to a number of already messed up jokes, thus making the film an especially enjoyable watch in a crowded cinema.

Funded by a $19 million budget, the CGI animation provided by Nitrogen Studios (among several other studios) is of course not going to rival the innovation and realism of Pixar or Dreamworks, but this is clearly not an intended goal - and the cartoony, light hearted visual style suits the tone of the film perfectly, and, in fact, there is still a surprising level of richness when it comes to textural detail and character fluidity considering the film's lower budget. The ensemble cast made up of, just to name a few key stars, Seth Rogen, Kristen Wiig, Jonah Hill, Edward Norton, Bill Hader, Michael Cera, James Franco, and countless other talents bring further life to an already hilarious script and a lineup of suitably bizarre characters; perhaps the film's major weakness is its excessive reliance on sex references as we approach its final act, which eventually morphs from humourous to a little too uncomfortable, particularly when you consider the design of the characters themselves. Sausage Party as a whole is far from a masterpiece, and I wouldn't dub it one of the most "memorable" films in recent times - that is, it provides a good laugh during initial viewing, but may not leave a huge lasting impression on most viewers. But, what it aims to offer it offers well - a briskly paced and laugh a minute animated adventure with a unique storyline and likeable characters.

Written and posted by Comptinator at 4:08 pm