CarrCom Blubs - The Reign of Five 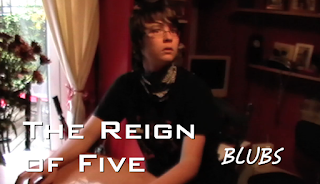 At last we arrive at the final blub list for the Five trilogy: The Reign of Five was a lot more polished than its predecessors when it comes to technical aspects but had a few dumb plot holes and errors. Let's check them out!

The smallest one yet...but I'm sure there'll be plenty more blubs to admire when The Attic's list arrives...
Written and posted by Anonymous at 8:36 pm