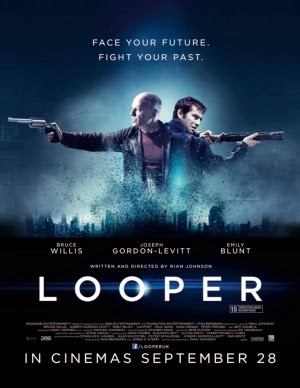 With franchise and popular genre films raking in the cash for Hollywood nowadays, it's very rare to see something that bravely innovates with a unique concept - this year's Looper, a time travel action flick by Rian Johnson, seemingly stands out from the crowd with its original premise, but has it truly put the innovation to good use?

By 2072, time travel has been invented but immediately rendered illegal - that doesn't stop the technology spreading across the black market, where criminal organizations utilize it to zap a person they want executed 30 years into the past to be quietly killed off by a collaborative paid assassin: a Looper. Joe (Joseph Gordon-Levitt), a rookie Looper, makes the ultimate mistake one day when he lets his future retired self (Bruce Willis) escape execution and flee into the present day to instigate revenge against his captors - his life depending on the completion of his assassination, Joe must now hunt down his future self whilst fleeing from the punishment of his remorseless employers.

Looper begins as an enjoyable and subtle science fiction flick - the film is primarily set in the year 2044, which is thankfully never exaggerated into a mishmash of CGI skyscrapers, spaceships and alien societies. Instead, the setting has a polished conservative feel, and the film mainly pinpoints toward the action genre with enjoyable set pieces and gunfights. But as Looper goes on, it loses steam. There is a distinct lack of focus when Joe's older self swoops into the fray, along with an almighty squandering of the creative premise throughout the middle and final moments of the film. The science fiction element is lost in translation, and the introduction of the character Sara (Emily Blunt), who serves as a sort of love interest, is where the story slides back onto lousy clichés and dull character development.

There is absolutely no chemistry between the two Joe's, just a bunch of argumentative banter and distant conflicting views - when the two are split apart throughout the bulk of the film, the focus is confused beyond measure and Bruce Willis becomes criminally underused and shunted aside in favour of gratuitous sex scenes and sluggish pacing. The film lacks any sense of urgency or thrill as the villain is never really explored, and in fact it seems Bruce Willis' character is sometimes just there to shoehorn a bit of excitement and action into what is without a doubt a boring film.

Is it bad? No. It's wonderfully acted, has its moments of emotional and narrative brilliance and definitely has a vastly creative premise. The younger version of Joe is an interesting character, one that is ravaged with flaws despite being the protagonist which makes him less of a pretentious hero and more of a diverse one; sadly his older self has very few moments to define him as anything more than a vengeful, generic action hero and the two share no real exciting moments. The film is visually impressive and very well shot, but unfortunately it squanders an impressive premise on a flimsy storyline and boring pacing. A decent flick, but not as 'mind boggling' as it's rendered out to be.

Written and posted by Anonymous at 10:13 pm